Like the layers of muscle shielding the abdominal cavity, your emotions will be steadily peeled away by this beautifully visceral ballad of love and loyalty. 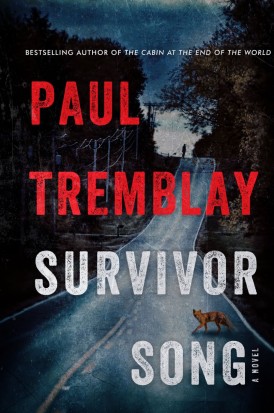 Paul Tremblay’s Survivor Song is an utterly believable imagining of what could and probably would happen with a pandemic of a more virulent and accelerated version of the rabies virus. What makes the story so terrifying is the fact that many of its beats ring so familiar already:

Folks insisting the whole thing is a hoax, even as hospitals are overwhelmed and doctors scramble to obtain enough PPE to protect themselves while treating the infected.

Conspiracy wackos asserting that the virus was commissioned and funded by enemies of America, otherwise known as the “Deep State.”

The boredom, depression, and anxiety that accompany being stuck at home, unable to go out and do normal things.

It has all the larger hallmarks of other epic tales (the super-fast pathogenesis, the militia element, the widespread panic) , even though the novel is relatively short. It says everything it needs to say in 320 pages. Or, in my case, 63 audio tracks. What makes it such an immediate and deeply emotional experience is its unwavering focus on one small struggle, taking it from its beginning until its end.

Natalie, widowed and infected in the same brief encounter at the start of this ride, is trying to get to a facility where a c-section may save her unborn baby before the sickness can turn her into a dying, mindless thing. She uses the time left to her to record audio letters to her child. Natalie’s old college friend, Ramola, uses her status as a doctor to push through the crowds and police and other obstacles to get Natalie where she needs to go. Natalie’s request that Ramola raise her child after she is gone is one that fills Ramola with complicated feelings that include healthy doses of fear and guilt.

But the tracks that pretty much finished me off were Numbers 50 and 61.

Unbelievably, unbearably sad, these passages follow two best friends caring for one another as best they can as the inevitable approaches. Follow them all the way down. As it happens, I was listening to this sequence while working. Had I been in my car commuting, I would’ve let the tears fall. As it was, I could only swallow hard and hope no one walked in to see my red, swimming eyes.

Many writers, myself included, find deep swells of inspiration by attaching a song to a particular scene and digging deep into that core emotion. I couldn’t help but wonder: Does Paul Tremblay do that? And if so, what song was he listening to when he wrote Number 50? Number 61? As I was listening, Jason Isbell’s “Only Children” played over the top of it in my head, and I just about fucking lost it. (A recommendation: Don’t listen to Isbell before reading this novel. That is, unless your goal is to bawl your eyes out.)

I mean, how many apocalypse novels have you read that have left you with a broken heart?