I got to work very early in the morning, while it was still dark. All the parking lot lamps were off, and there were no lights on in the entire factory. I made my way up the hall to the refrigeration inventory area, where there is a long wall with lockers and refrigerators along it. I could barely see anything, but by the faint moonlight I could discern that the way to Manufacturing Administration was completely blocked by a jumble of office equipment and furniture, piled in the hall. The entire building was dead quiet. Where was everybody?

Then I looked back the way I’d just come and realized there were silent black shapes seated on stools, all along the wall.

They were fellow employees, mostly from Assembly. I walked up to several of the shadowy figures, trying to get a response out of them. I stopped in front of a young woman. She said nothing to me. I reached out to touch her. She was cold and stiff. My light touch knocked her off balance and she fell face-first to the floor with a dull thud. Every last one of them was a corpse in advanced stages of rigor mortis. 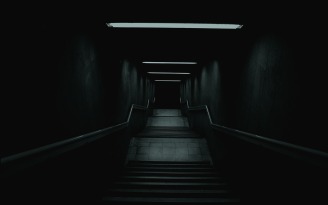 It was then that I understood there was only one living thing in the building besides me: Alice Cooper. He could be anywhere, maybe even close by, hidden in darkness. If he found me, he would drain the life from me, as he had my coworkers.

Image by José Gracia from Pixabay

One thought on “Dream #86: When Alice Cooper is Done, Only Your Desiccated Husk Remains”